Exchanges of underwater stock options, or “repricings” still occur on occasion.  Public companies are almost certain to invite criticism from certain institutional shareholders and their advisers who may use a repricing to contest the election of any director who supports a repricing.  Nonetheless, companies occasionally believe a repricing is in the best interests of shareholders as whole, and in private companies repricings can be accomplished without regard to ISS or other institutional advisers.

Once a company decides to move forward with a repricing program, it must dive into the detail of implementing the program.  There are a couple issues to sort through.  In an exchange, value is given up by employees in the form of the return of options, and value is received in the form of replacement options.  In theory, even institutional shareholders should be content with an exchange in which the value given in the form of new options equals the value received back in the form of old options.  Also, the company may want to look at the relationship of options granted at different times that have different strike prices and different remaining terms.  Sometimes a company will do a one size fits all repricing, as Google did in 2009 when it allowed any person to trade in one share of an old option for exactly one share of a new option, but this type of repricing seems to have become less common for public companies.

How does one go about computing an equal exchange?  While its use as a management tool is questioned by many, the “Black Scholes” option pricing model is commonly used as a starting point (the criticism of the use of Black Scholes can be summarized by the observation, “the Black Scholes value may be high or it may be low in any particular case, but it almost certainly will prove to be wrong”).  In performing this exercise, one typically is solving for the number of replacement shares because everything else can be readily determined.  The Exchange Ratio formula, (essentially borrowed from the GAAP accounting treatment for options) is as follows:

This then converts algebraically to the following:

As an example, consider the following assumptions:

Presumably, the replacement option will have exactly the same terms as the old option, except for the exercise price.  the next step is to compute the Black Scholes Value of the old option as of the date of the exchange.  Thus, the underlying stock would have a value of $2 but the exercise price would $3, $5, $7, $10 or $12 depending on the tranche off the grant.  Then, the Black Scholes Value of the new option is also determined.  Simple Black Scholes calculators are easily available.  Assuming no dividends are paid, a nice and simple calculator can be found at mystockoptions.com (we have also assumed a 3% risk free interest rate and a 40% stock volatility).

The following chart demonstrates how the calculation is made for each tranche:

The following chart translates each tranche into an exchange ratio: 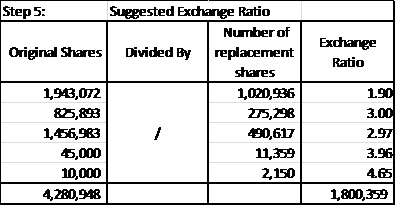 Having this calculation in hand usually is just a starting point.  Following this chart directly would result in optionees in the first tranche receiving just a little more than half of the original options and the 10,000 grant tier optionee will receive less than a quarter.  This cutback might simply be deemed too unattractive to employees to even attempt an exchange.  For that reason companies often back off of the strict use of this kind of schedule.  They may not go as vanilla as Google did, but they will often step back from the harshness of the cutback above.

It might also be observed that from a private company perspective, options are typically granted on the basis of acceptable dilution.  Assume for example that the 4.2 million shares originally granted above constituted 20% dilution (which suggests that 17.1 million shares are owned outside the plan on a fully diluted basis).  If the company were to cut back shares in the plan to the projected 1.8 million, the fully diluted percentage ownership of the optionholders would drop to 10%.  Private company management shareholders usually drive share pools to what they consider optimal levels to incentivize employees.  If 20% was determined to be optimal, a drop to 10% is probably sub-optimal.  While the private company shareholders might demand some haircut (though they more likely would not look for much of a haircut, if any), they are unlikely to conclude the above type of cutback is in their interests.

So what is the appropriate cutback level?  This question is often answered by taking into account the unique circumstances–what were the factors causing the stock price drop, is motivation of employees in question, can motivation be increased by a repricing, at what point does a repricing actually incentivize employees and what are the perceptions by shareholders?  The cutbacks tend to be far less dramatic in practice.  For example, consider the range used by Quantum Fuel Systems Technologies Worldwide, Inc. in 2008:

Option exchanges have a legitimates place in the world of employee compensation, depending on the circumstances.  The mechanics of designing a program are complex and difficult to wade through, but in the end, leveraging off a few basics, the right blend can be determined.