DODD-FRANK added new subsection (j) to Section 14 of the Exchange Act of 1934, directing the SEC to adopt a rule requiring a description of the relationship between actual executive compensation and the company’s financial performance, taking into account the change in value of the stock of the company, and any dividends and distributions.

On April 29, 2015, the SEC issued proposed guidance for assessing pay for performance by comparing annual compensation to the change in the company’s stock price.[1] This seemingly innocuous requirement (especially given that many companies already provide some guidance) is a substantive government determination that total shareholder return (“TSR”) is a preferred way to determine pay for performance, when most consultants and advisers believe there are other, and depending on the circumstances, better measures, such as analyzing profitable growth (a combination of positive revenue change and profitability or less dramatic losses) or cash flows. TSR, while not irrelevant in assessing pay for performance, can lead to misleading results for a variety of reasons including market forces outside the control of the company. Such a determinant also may penalize managers who operate an environment where controlling the losses may well be a substantial achievement.

“Emerging growth companies”[2] under the “Jobs Act” are exempt from this rule.

Executive Pay:The proposed rule would require a table setting forth elements of pay for the NEOs for a five year period alongside company TSR.  The proposed table would be as follows:

Thus, column (b) requires the company to simply use the summary compensation table amounts for the CEO (“PEO”) from the proxy for the year in question, while column (d) does the same for all other NEOs in the form of an average. Columns (c) and (e) then make certain adjustments.  If there is more than one CEO in a year, the rule would require the inclusion of all CEO pay for the year regardless of to whom paid.  “Actual pay” in columns (c) and (e) is determined by starting with SCT pay from columns (b) and (d) respectively and then adjustments are made, the most significant for most technology companies is to pull out the fair value of all equity awards and replace them with the fair value of the equity awards on the date of vesting.

Thus, for equity awards, the fair market value of an award is determined as of the date of vesting for those equity awards for which all applicable vesting requirements have been satisfied in the reporting year.  Not only will the awards be presented on the basis of when they vest, as opposed to the summary compensation table requirement that awards be reflected when granted, but the fair value will be determined as of the vesting date.

Fair value in this instance is not, of course the “intrinsic” or in the money value, but is the Black Scholes or other model driven value (such as lattice, binomial or Monte Carlos simulation models) required by the SEC and FASB under Topic 718.  However, intrinsic value does figure into model driven values.  If the options are “in the money,” that portion of the grant related to the vested options presumably will be higher than reported in the summary compensation table, Conversely, it would be likely that out of the money options would be reflected at a lower fair value in the actually paid as opposed to the summary compensation column.

The company is already required to make vesting valuation determinations in the options exercised and stock vested table, though only with respect to options which are actually exercised.  Also, the company is already required to disclose in a footnote (which can be by reference to the 10-k) the assumptions used in its valuation model.  If the grant date assumptions used in the pay vs performance table vary from those used in the summary compensation table, the company must disclose the differences in a footnote.

For “full value” awards such as restricted stock or restricted stock units, the vesting calculation is generally just computed by the stock price at the date of vesting.  However, if a delayed delivery date is built into an RSU, the market value of the delay will have to be taken into account.

One can readily see for multiple CEOs, and indeed for all NEOs, the distortion that will be caused by new hire and severance packages which must be in the summary compensation table but which are not adjusted out, except as necessary to reflect the vesting of stock award or pension adjustments.

TSR. As for the required performance measure, the SEC requires use of TSR, though companies may add information on other performance metrics so long as clearly described and not given more prominence than the TSR comparison.

The company must also disclose a peer group average TSR (not required for small filers) for the same period as the company’s reporting year.  The peer group can either be the same group used in the performance graph or the peer group in the CD&A.  Either of these can be an index, but if the TSR is based on a group which is not an index, each member of the peer group must be disclosed and the TSR for each must be weighted by market capitalization determined at the beginning of the period. Inasmuch as peer groups do not stay constant over the years, it will be interesting to see the effect of a moving peer group through the years.

As an example of a graphic illustration, consider the following assumptions about CEO pay for the three years preceding 2016, which is assumed for this example to be the first year the new rule might be applicable:

The graph to accompany such results could take the form of a double axis with a TSR indexed on the right axis to assume the company’s 2013 TSR is 100. 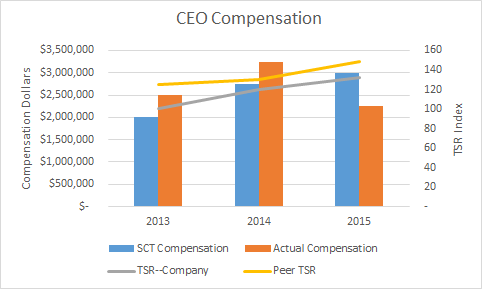 Transition Rules and Effective Dates.  The proposed rule would allow for some phase-in.  In the first filing, companies would only be required to report three years of data.  In the second filing, the new year would be added, and by the third year the company would work its way into the required five years. Small filers only need to report three years total and may start with only two years in the first year and three thereafter.  Also, companies do not have to report data for any year in which it is not a public reporting company.The SEC will vote on any final rule and the debate promises to be spirited and perhaps take some time.  The effective date will presumably be known after the final vote.

[1] http://www.gpo.gov/fdsys/pkg/FR-2015-05-07/pdf/2015-10429.pdf [2] Emerging growth companies are issuers completing an initial public offering after Dec. 8, 2011 with total annual gross revenues of less than $1 billion from the most recently completed fiscal year. Emerging growth company status terminates on the earliest of: